In this article, we will learn about exception handling in python by exploring try, except, else and finally statements. By knowing about how to handle exceptions, we can write better and neat code.

Error occurring is an unfortunate event in coding that happens when something in the code is not right. It could be a human mistake in coding structure or calculations. For Example:

What is Exception Handling in Python?

Before we jump into knowing about Exception Handling in Python, we must learn about why we need to handle exceptions in the first place. When you are coding in python or any other programming language, you are bound to have errors and some of those errors might terminate your whole program. But, what if, you as a developer is able to tackle those errors with exception handling methods? So yes! there are exception handling methods in python for developers to deal with recurring errors. 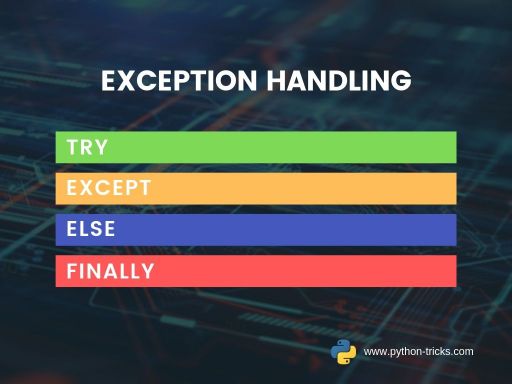 When you think that there are chances of having an error then you can use a try-except block to handle it. You can tell python what to ‘try’ and what not ‘except’ a certain exception. For example:

You can use exceptions to prevent programs from crashing. This is very reason why we need exceptions in the first place.

Let’s look at a quick example of the zero exception error that happens when a number is divided by 0.

It’s impossible to do so, see below:

Above, you can see that there is a ZeroDivisionError: division by zero, python stops the program right there unless we put an exception to prepare ourselves for this kind of error.

When we are working with files, it is very common to have missing files issues. This may occur due to a different storage location of the file or maybe you have misspelled the file name or the file may not exist at all. Let’s try an example and read a file named ‘popeye.txt’. Now the below program is trying to read the file ‘popeye.txt’ but since we haven’t saved the file let’s see what happens:

The output reports a FileNotFoundError exception. To minimize this exception, the try-except block will be useful so that the program doesn’t generate any error.

To make more sense of the try-except block, we can introduce an else statement with it as well to or calculate the answer if the given condition is met otherwise. For Example:

After trying out try-except and try-except-else blocks, it is time to learn about the finally block. This block will always execute no matter whether try turns out to be true or false. For Example:

Here is a list of more python built-in-exceptions that can help you minimize errors in your programs. Check out more on Python Exceptions Docs